This study aims to describe the estrous cycle and follicles development in female rats given infusion of fennel fruit that known to have phytoestrogen compound. Twenty five of female rats were used in this research and were divided into 5 groups. Group I was negative control group (NC), given 1 mL/100g bw of distilled water, group II was positive control group (PC), given 0.0045 mg/100g bw of ethinyl estradiol, groups III, IV and V were treatment groups (TI, T2 and T3), given fennel infusion at 36.5; 73 and 146 mg/100g bw respectively. All treatments were conducted every morning for 20 days by oral route. Changes of vaginal epithelium were observed through vaginal swabs previously stained with Giemsa stain. Histopathological examination of ovarian swere examined to reveal follicles development. Results showed that fennel fruit infusion extended the duration of estrous and metestrous phases, while shortened the proestrous and diestrous phases. Eventhough the longest estrous phase was found in T3 group, there was no significant effect on the lengthening of estrous cycle. Moreover, infusion of fennel fruit had no effect on the development of ovarian follicles, except tended to increase the number of corpus luteum. 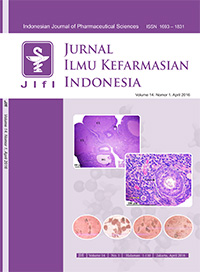